Plexus Co.,Ltd and euphonic,inc. is proudly announcing the release of the e-Book version of Daido Moriyama's legendary series "RECORD : No.29" on February 12th, 2016. “Record No.29” is filled with the snaps from Tokyo. The one and the only written commemoration by Daido Moriyama, dedicated to Takuma Nakahira is included in the afterword of this issue.


"Throughout my life, Nakahira was a “one and only” sort of friend,
and a rival at the same time."

- DAIDO MORIYAMA (Experts from the original text of Record No.29)


“Throughout my life, Nakahira was a “one and only” sort of friend, and a rival at the same time.
Even though we couldn’t have been more different in terms of both character and constitution, there was one thing that we both shared, and that one thing obviously tied us soundly together. “
- DAIDO MORIYAMA (Experts from the original text of Record No.29)

The shadows of the people and the buildings in the back alley.....
The scenery veiled with quietness awakens the memory like a déjà-vu......
Record No.29 is filled with the snaps from Tokyo.
The one and the only written commemoration by Daido Moriyama, dedicated to Takuma Nakahira is included in the afterword of this issue. 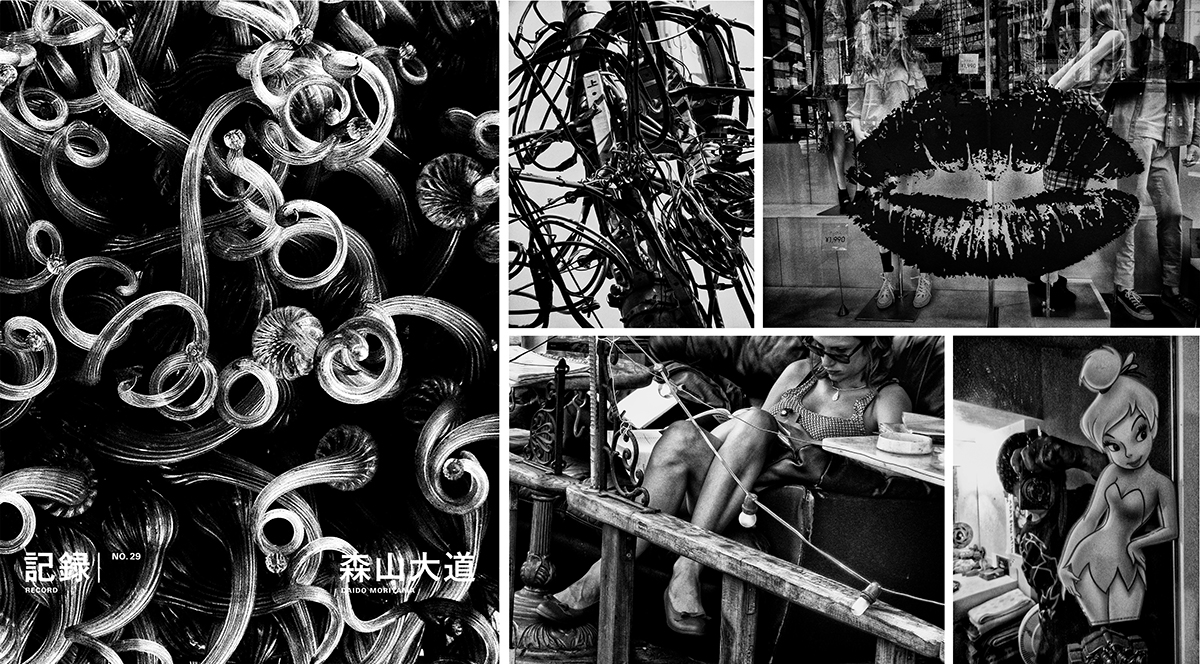 What is DAIDO MORIYAMA's "RECORD"?
It was 34 years ago, back in 1972, that I came out with the self-published photo journal 'Kiroku.' At the time, I was busy with all sorts of work for magazines. Partly because of a daily feeling inside that I shouldn't let myself get carried away by it all, I came up with the idea of a small, self-published personal photo journal. Without any ties to work or any fixed topic, I just wanted to continue publishing a 16-page booklet with an arbitrary selection of favorite photos among the pictures I snapped from day to day. By nature, it was directed first and foremost to myself rather than other people. I wanted a simple, basic title, so I called it 'Kiroku' (record).

Who is DAIDO MORIYAMA?
DAIDO MORIYAMA/Born 1938 in Osaka. After working as an assistant for photographers Takeji Iwamiya and Eikoh Hosoe, he went independent in 1964. He has been publishing his works in photography magazines among others, and received a New Artist Award from the Japan Photo Critics Association for Japan: A Photo Theater in 1967. Between 1968 and ’70 he was involved in the photo fanzine Provoke, and his style of grainy, high-contrast images that came to be referred to as “are, bure, boke” (grainy, blurry, out-of-focus) made an impact on the realm of photography. Solo shows at New York' s Metropolitan Museum of Art and the Fondation Cartier pour l’Art Contemporain in Paris solidified Moriyama’s worldwide reputation, and in 2012, he became the first Japanese to be awarded in the category of Lifetime Achievement at the 28th Annual Infinity Awards hosted by the International Center of Photography (ICP) in New York. The “William Klein + Daido Moriyama” exhibition together with William Klein at London’s Tate Modern in 2012-13 was a showdown of two immensely popular photographers that took the world by storm. Daido keeps going on enourmous amount of Street Snap under the motto…. "There are no Quality without Quantity". e-Book version of "Record series" was originally released in June, 2013 domestic in Japan, and it has been released worldwide in September, 2014 from Apple iBookstore and Kindle Store. e-Book version of "Record Series" will continue.


All the detailed informations about Daido Moriyama's "RECORD" content and distribution is published at Plexus Website. Daido Moriyama on PLEXUS
http://www.plexus.tokyo/artists/daido/record/content/record_list_en